The US Cuba embargo no longer matters and has not for many years. 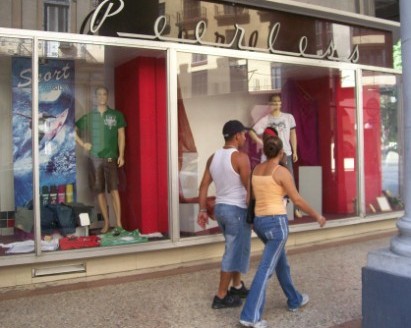 The Peerless Store in Old Havana offers goods from China

At this moment, Cuba trades with many countries... with China and Venezuela, as well as Spain, Germany, Italy, the United States and Canada.

Dollar stores around the world now sell Chinese-produced goods... everything imaginable... for a very low price, far lower than any American-made product could be produced.

Cubans can buy far more, far cheaper from China, and they do. 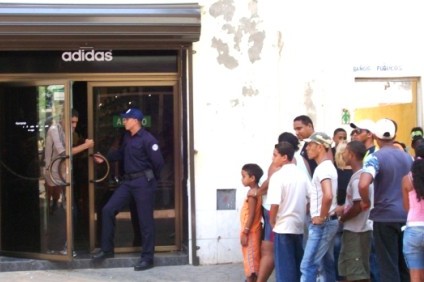 Cubans wait in line to get inside the Adidas shop

In the last few years they have bought refrigerators, fans and electric burners in large numbers, as well as new buses and even new trains, all made in China. The clothing, domestic and electronic goods in CUC stores in Cuba are mostly from China.

The American embargo has not included food or pharmaceuticals since a 2002 amendment.

There are always American chickens, eggs, soy, corn, wheat, apples, canned and boxed foods in Havana Dollar stores. These expensive foods are only available to tourists or those Cubans with Miami relatives who send them dollars.

So when you read about the American embargo against Cuba, think again. Cuba is able to legally import everything it wants from China and the other trade partners.

Return from Cuba Embargo to Home Page
FacebookTwitterPinterestTumblrRedditWhatsApp
[?]Subscribe To This Site
Welcome to Havana