There is a building along the Malecon, in Vedado, that was known as the US Interests Section.

The former United States Interests Section is now renamed The Embassy of the United States of America. The US has reopened its embassy in Cuba more than 54 years after it was closed, in a symbolic step between both countries.

It is staffed by American foreign service people and local Cubans who are also employed by Uncle Sam. However, there is no longer a constant flow of Cuban applications for migration to America.

The long lineups are gone. Cubans now must go abroad and apply from another country for a US Visa. 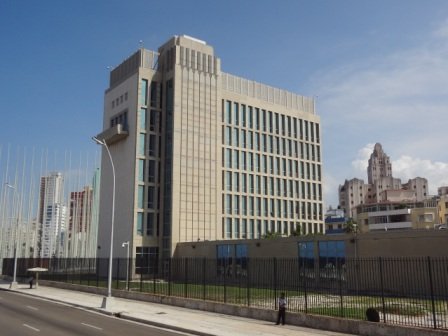 The building was originally the United States Embassy

It was designed by Harrison Abramovitz architects and was built on Havana's Malecon in 1953.

Though diplomatic relations with Cuba were broken in 1961 by President Eisenhower, they were normalized under the Carter administration in 1977.

There has been a lot of political turmoil over the years, including

When the young Cuban boy, Elian Gonzalez, was still in Florida in 2000, an empty field near the American Interests Section was paved over. With the help of Cuban students, a stage was built.

It is called the Jose Marti Anti-Imperialist Plaza and is largely used for outdoor meetings. 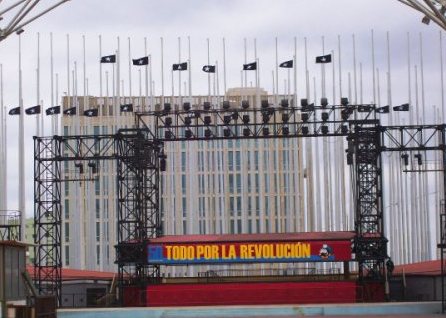 50th Anniversary of the Revolution sign in Anti-Imperialist Plaza

Return from US Interests Section to Walking the Malecon Home Page
FacebookTwitterPinterestTumblrRedditWhatsApp
[?]Subscribe To This Site
Welcome to Havana