Five decades after Fidel Castro ordered Cuban golf courses to be closed down because he considered them "elitist", the island's communist government has approved the construction of a luxury golf resort, complete with an 18-hole course.

The $350m (£227m) Carbonera Club proposed by British firm Esencia is the first of a dozen similar initiatives that have long been under consideration.

The move is a sign of the changing times here, as the government seeks new revenue sources to fund its socialist revolution. "It will be a major complement to the tourist offering of Varadero and the start of a whole new policy to increase the presence of golf in Cuba," Tourism Minister Manuel Marrero told the BBC during a visit to Varadero.

Golfers are renowned for travelling to new places; it's a multi-billion dollar industry”.

Andrew McDonald, CEO of Esencia, confirmed that a formal deal had been reached for a joint venture between Esencia and the Cuban government to develop the Carbonera resort, a short distance along the coast.

"We've been working on this for seven years, step by step, so we're very excited it's finally going to happen," Esencia's CEO Andrew McDonald said on a tour of the 170-hectare (420-acre) site.

As well as the golf course, the plans include the construction of an exclusive, gated community of some 650 apartments and villas.

There will also be a hotel and a country club, complete with tennis courts, spa and a yacht club.

And Carbonera is not the only project in the pipeline. A second golf project, with Chinese investment, is expected to be approved.

Other resorts will then be rolled out gradually across the island with Spanish, Vietnamese and Russian funding. 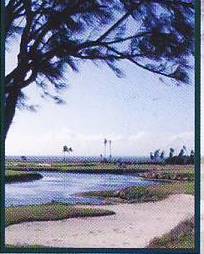 But it has taken Cuba a long time to come around.

In pre-Communist times, there were at least seven golf courses on the island, frequented mainly by wealthy residents and US visitors. locals recall.

Even Fidel Castro famously played a round in Havana once, taking on Che Guevara dressed in military fatigues.

But he was clearly not a convert, ordering Cuba's courses be put to less "bourgeois" use.

Today, one of them lies abandoned just outside Havana; another became a special forces training ground and a third forms the rolling lawns of a city arts school.

But pragmatism is finally overcoming lingering resistance to reversing that move.

Attempts to drill for oil and bring economic independence to Cuba have come up dry and the death of the island's key financial backer, Venezuelan leader Hugo Chavez, has made the future more uncertain.

So once unthinkable things are happening here. Tourism is now the second biggest source of income on an island once closed to the outside world.

Cuban officials are keen to sell golf as a "democratic sport" benefitting all Cubans.

"I think there's more openness to bringing people like us in. As long as Cubans are in charge of the speed of the process, then anything is possible," he says.

As for golf, Cuba is keen to re-style the game as a democratic sport, pointing out that the sport has been included in the next Olympic Games.

"Of course it's not for all Cubans at this moment," admits Enrique Nunez, owner of a successful Havana restaurant and recent golf convert.

A round costs five times the average monthly state wage here. But there is already talk of creating a golf federation for locals, taking advantage of the new tourist facilities.

"I think golf could have a good future here. We love baseball, and the swing is similar," Mr Nunez suggests.

Even though the sport was banned for so long, "we could be naturals.”